Like many others living in and around the San Francisco Bay Area and across California, David Kuntz woke up to an eerie scene of darkened, orange-hued skies and ash raining down as historic wildfires raged across the state one Wednesday morning in April 2020. As people took to Twitter to complain about oversleeping due to the sky being so dark and make memes about the ominous apocalypse, only one thought consumed David: the safety of his 11-year-old son, Tekoa.

A heart patient who had to undergo three open-heart surgeries at the ages of one week, seven months and three years, Tekoa would be at high risk in the event of a power outage. “He has a compromised immune system,” David tells us. “Even something like the flu could be a huge problem. Most have the ability to go to a local hospital but in my son’s case, if he gets ill, we have to go to Ohio (approx. 2,200+ km) where his surgeon is based. Being able to have backup power in case of a power outage was essential for us.”

In anticipation, David applied for a Tesla Powerwall as a backup generator. He would wait for the better part of five months before being told his application for the generator was declined because he lived one mile outside the boundary to qualify for the generator.

His quest for a solution made him aware of Portable Electric’s partnership with one of California’s leading utility companies. Per the partnership, our Voltstack 5k electric generator or portable power station would support the medically vulnerable in California during power outages caused by the then-unprecedented wildfires. Within a month of his application, a Voltstack 5k was powering everything he needed to ensure his child was safe.

“To be honest, I prefer the Voltstack over the Powerwall because it’s portable,” David says. “If we do have to evacuate I will have energy wherever I have to go for any medical devices and, depending on the sun, I could run the fridge for about 12 hours a day. Thank you Portable Electric for the hard work and for making sure that we were helped even though we did not qualify for the Powerwall.” 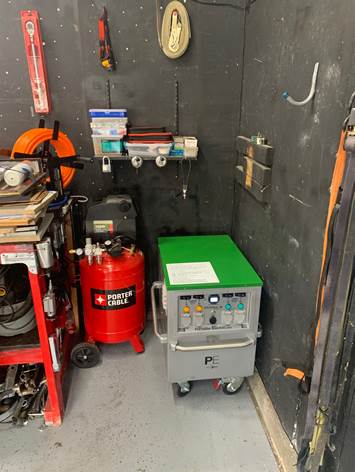 To learn more about Voltstack 5k, get in touch with an Energy Consultant today!